Jay, Frank and I arrived in Lodwar Friday morning and then set out Saturday to visit a couple of the bush churches.  The first one we visited required a twenty minute boatride on Lake Turkana to a place called Longech.  This is a new church plant by Pastor George Lokwawi.  Everytime I'm with George he is taking me to another new church he has planted. He has a real gift for evangelism and church planting, as does Boniface Lokuruku pictured here and below. While we were waiting for our boat to arrive, Boniface started sharing the gospel with the inevitable crowd that gathers whenever muzungus are around. 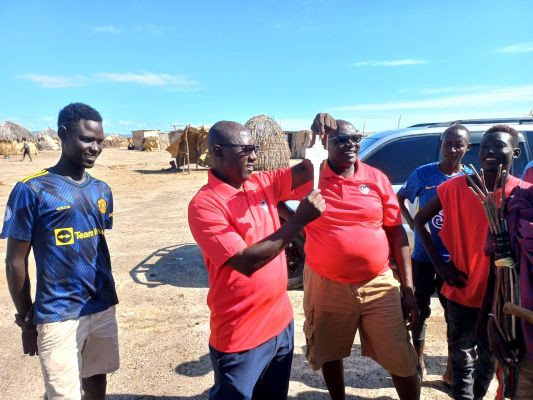 He used a simple sheet of paper, folding and tearing it as he went to tell the gospel story and ended up at the cross. It was an amazing display of readiness and eagerness to share the good news at any opportunity.

The church is literally on the beach at Longech, with palm trees and white sand. I think I could belong to this church! 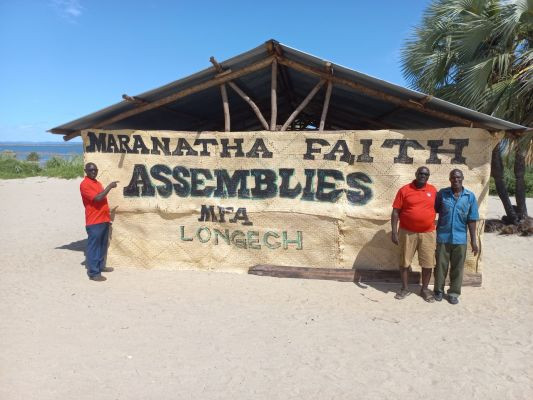 We spent some time hearing from the pastor and leaders of Longech, and then shared with them our mission to train and equip pastors and church leaders. One of the tools we use is a mini-SD card that they can insert in their phones to access the audio bible, teaching series, gospel stories and study helps in their own language. We've tried other devices in the past and have found they do not stand up to the rigors of life in Turkana, but almost everyone in leadership has a phone and they take very good care of them since they have invested their own money.  The audio format is also best because most of the people in the bush cannot read or write, but they know how to listen!

I think Jay was thinking this place was pretty cool too. 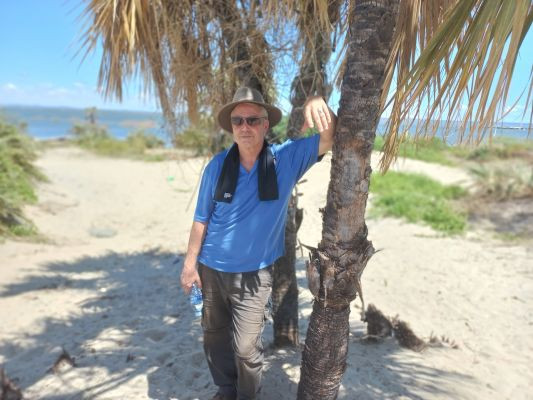 After we got back to the mainland, George admitted he was a bit intimidated by the little boat and the big water, even though I assured him that since Lake Turkana is a salt lake, he would float quite well. 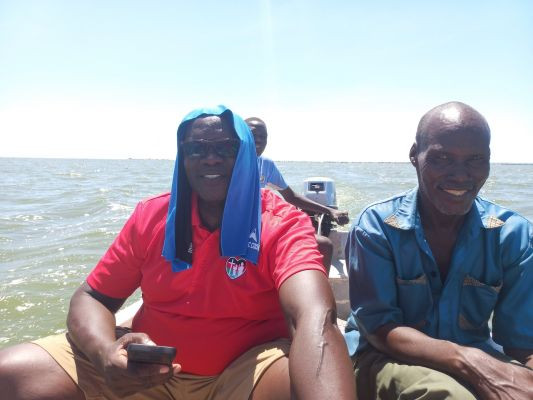 Leaving Longech, we headed north to a village I had been to a few times called Nakapokan.  I believe this was the second or third church we had help build in Turkana six years ago. In addition to housing the church, this structure also served as the first primary school in the village until the government got its act together and built a primary school a couple years ago.

This was also a memorial journey of sorts as the original pastor, a friend of mine, had died over a year ago - Pastor Thomas.

We went to Nakapokan to see how the church was doing and give them greetings and exortation, and to see the widow of Pastor Thomas, and the house some generous API donors had provided for her.

She asked us to pray and dedicate the place to the Lord.  This home will serve her as a shop to sell things from one half, while living in the other.  Widows have a very hard time in this area when the husband dies as they usually have no other source of income. She was very grateful to her unknow benefactors and thanked us profusely on their behalf.

Again, thank you all who are praying for, and supporting this mission. More and more people are being reached with the gospel as we train and equip those who are going out. Pastor George told me that ever since we have been holding our annual conference in Lodwar, he requires that the pastors and church leaders of all the new churches he plants must attend the conference for training. We thank God that we are able to be a small part of extending the kingdom of God in this land.
Tweet
Spring Mission 2022
Spring Mission 2022