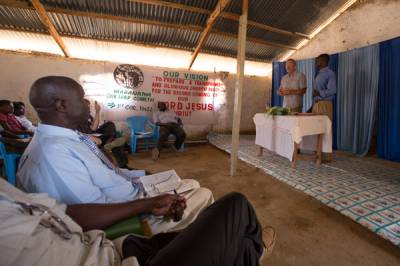 In the afternoon, we took a trip to Lake Turkana where there is a small resort. Pastor Shadrack characterized this trip as simply 'entertainment'. which as it turned out was anything but entertaining.  It was however an adventure.  Things were going fairly well (given the conditions of the Kenyan roads) when we developed some mechanical failure in the vehicle about 12 km from our destination.  Normally this wouldn't have been a problem as we could call someone to pick us up.  But apparently this place was a vast dead zone for cell reception. Pastor George and Pastor Shadrack attempted to effect repairs but things were beyond mere roadside mechanics. 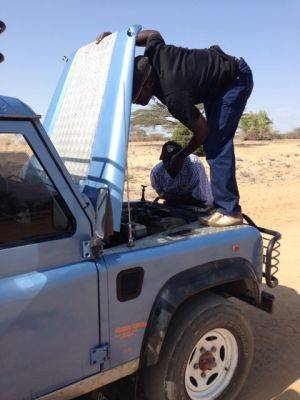 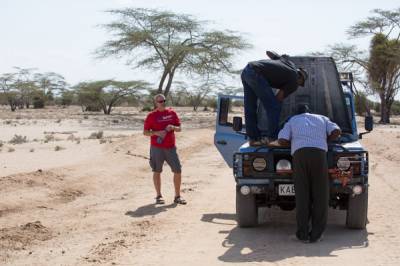 Pastor Leonard and I decided to start walking to the resort to see if we could get a vehicle to take us back to Lodwar. Rob stayed with the vehicle to lend moral support to the others. 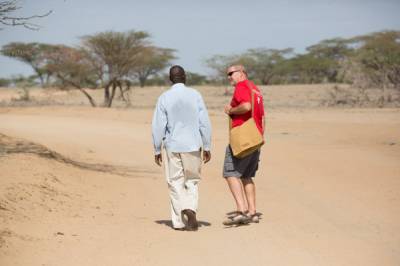 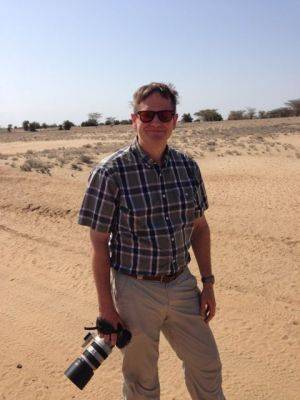 As you can guess, this area is rather devoid of helpful passing vehicles. 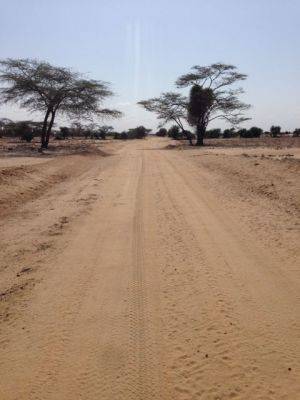 But there are goats. 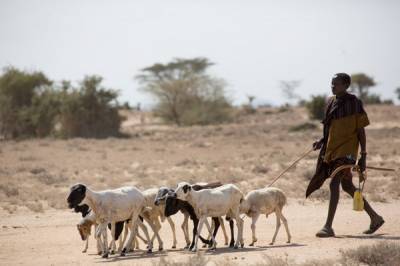 Eventually Leonard and I did run into a guy on a motorbike who agreed to take us the rest of the way into the resort. He wanted to take both of us but I'm not really a fan of three on a motorbike.

Meanwhile I stayed in the shade to await his return.

I finally got to the resort an hour later, after one minor wreck and a skinned knee and shaken confidence in the driver.  Our plan was to return with a vehicle to pick the others up, come to the resort, have lunch and then hire a drive back to Lodwar.  Meanwhile, ignorant of the planning going on back at the broken Land Rover, Rob was put on a rare passing vehicle to take him to Lodwar with George to get a mechanic to come and fix the car. When Leonard arrived to pick them up, only Shadrack was there.  Leonard brought him back to the resort where we negotiated a steep fee for a vehicle to take us to town.  Unfortunately, they demanded cash in advance but we were fairly stuck there so we paid.  It was now about 9:30 pm.

All was going well until we had passed the broken down Rover and gone about 3 km when the rear wheel of our vehicle decided to give up the ghost. My thought was 'Okay, we'll just put on the spare and proceed'.  Which would have worked had the spare been aired up recently.  It was just as flat as the other.  Thinking quickly, but not very soundly, it was decided that Shadrack and the driver would walk back to the abandoned Rover and pull a tire to put on our vehicle.  I took a nap.

When Shadrack and the driver returned, they had no tire with them as they had discovered that it was a much bigger tire and wouldn't do the trick.  We were pretty much out of options at that point and I was beginning to think I'd be camping in this desert overnight.  But we had prayed earlier, asking God to send a vehicle our way to take us to Lodwar; and just as I was settling down to go back to sleep, a car showed up.

It was a small wagon type vehicle with four people already in it.  I was squeezed into the middle in the back seat between two rather large women, while Shadrack and Leonard were put in the boot - the cargo area that was about 3 feet by 3 feet.  Thus ensconced, we slowly made our way home. It became rather obvious that these travelers had enjoyed a bit too much of the happy juice, as my companion in the second seat kept offering me a drink from the bottle of Bailey's Irish Cream she was finishing.  I kept praying.

We finally arrived at our place of residence early Monday morning around 12:15.  We got out of the car, thanked God and these well-meaning Good Samaritans, and went to bed.